Show Notes:
– Dylan, Dennis and Nick jammed the intro of ‘Master Of Puppets’ by Metallica before ‘Splayed’. When Dylan couldn’t continue playing the song anymore, Wes commented “he’s to young to know the song”.
– Before ‘The Girl In Black’, the band had Kristian from Jayce Lewis come out and strip his pants to expose the cut he got in Berlin.
– After ‘How To Look Naked’, Wes took a shirt that was thrown on stage and asked the crowd whom it belonged, someone in the front row said it was his, even though it probably wasn’t, but still handed it to him and made a joke about it being covered in AIDS.

Other Notes:
– Setlist order is unconfirmed, but it is 100% confirmed that these were all played songs.
– Wes held an autograph signing session for Jackson Guitars at the venue before the show. 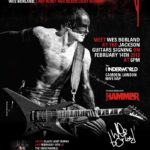