xx. Round And Round (Ratt cover)
xx. I Wanna Be Sedated (Ramones cover)
xx. You Really Got Me (The Kinks cover)
xx. Rock And Roll All Nite (KISS cover)

Show Notes:
– Fred came out for the last three songs of the night, ‘I Wanna be Sedated’ (Ramones cover), ‘You Really Got Me’ (The Kinks cover) and ‘Rock And Roll All Nite (KISS cover).
– Other guests were Steve Stevens, Steve Jones, Mark McGrath and Donovan Leitch. It remains unknown for which songs they guested, though.

Other Notes:
– Incomplete setlist. If you were there and know the full setlist, please let us know!
– This was a private party that Camp Freddy played at St. Regis Hotel.
– Billy Morrison talking about this show:
“Fred Durst closed out the night with three songs (‘I Wanna Be Sedated’, ‘You Really Got Me’ and ‘Rock And Roll All Nite’) and blew everyone away! Steve Stevens and Steve Jones provided guest guitar duties and Mark McGrath joined our own Donovan Leitch at the mic throughout the evening. Navarro astounded me personally with a solo in ‘Round And Round’ that lit the place up…. I have to say that the way Dave plays is pretty fucking special.” 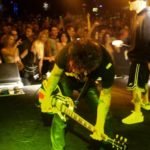