Other Notes:
– Sold out show. Admission was 10$.
– Thanks to Gabe for the flyer! This is what he remembers:
I remember this show like it was yesterday. I was 18 years old in 1996. I don’t know if it was a few weeks or days before the show, but I remember we were all at this shithole club called Purgatory on Beach Blvd that was always packed & Wes showed up with the stack of these flyers to flyer the parking lot which is how I got my hands on a couple of these flyers that I somehow still have to this day.
Fred & Bizkit had managed to have Sugar Ray open up the show, then Funk Doobiest had center billing, & Bizkit headlined. You have to realize in 1996 this was a BIG FUCKING DEAL in Jacksonville. It was massive that these two bands opened the show instead of local bands. And Bizkit was the next band in Jacksonville since Lynyrd Skynyrd who actually got signed to a record deal.
Bizkit had just gotten their first tour bus, which they rode in and parked behind the venue like Pimps. Then if I recall correctly used this bus to tour with Korn.
This was my first experience ever Of watching a sold out show from side stage. This is the same venue where I saw Danzig when I was 15, & White Zombie, Morbid Angel, Motörhead, & Black Sabbath in my early metal head years.
Bizkit selling this place out as a local band made Jax and all the rest of us guys in local bands know they were about to be huge. And showing up in a tour bus was some #Baller shit.
That’s some Memory Lane for ya…..
– If you know a full or partial setlist for this show, please let us know! 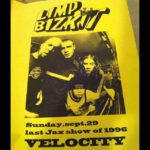