Other Notes:
– According to the poster below, Limp Bizkit were due to open for the Deftones in San Antonio as well, but this show has been cancelled in favor of the Deftones playing a couple shows in California, instead. After the show in St. Paul, Minnesota, Limp Bizkit played four radio christmas shows. 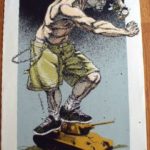