Show Notes:
– DJ Lethal wore a christmas hat until the intro of ‘Counterfeit’.
– Fred made a shoutout to The Bloodhound Gang before ‘Counterfeit’ and mentioned that one of the first shows the band played was opening for them in 1995.
– Before ‘Faith’ (George Michael cover), Fred claimed that this was the best show they had until that point.
– Fred stage-dived during the end of ‘Faith’ (George Michael cover). When cming back on stage towards, he was missing one shoe. After that shoe was given back to him, he threw his microphone on stage.

Other Notes:
– This was a radio christmas show sponsored by KLZR The Lazer’s 105.9 FM radio. 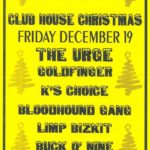