Show Notes:
– During the bridge of Nobody Loves Me, Fred climbed up the stage on the right side, roughly 15 feet high, continued the song then stage dived into the crowd right when the song kicked back in from the bridge. After he came back on stage, he asked if anyone got hurt, but it wasn’t the case. A couple years later, when MTV interviewed the band about the incident, Fred said: “Everybody was just screaming to jump and I was going “I can’t back down now”. I just sort of took a big breath and closed my eyes and jump in this and it caught me, it was scary, if I hit the ground, I would have died for sure.” When asked about it, Wes commented “I was scared for him, I was scared for the people who caught him, it was a definitely a very risky and ballsy thing to do.” and Sam commented “He’s gonna get up there and realize that “this is too high and I’m gonna come back now and look like an idiot”. He did it and it was the most amazing thing I’ve ever seen, it was a good moment.”
– Fred made a shoutout to K-Rock before ‘Wicked’ (Ice Cube cover), causing the crowd to boo loud at them.
– Fred dedicated ‘Wicked’ (Ice Cube cover) to KoRn, Ice Cube and Slayer.
– Wes jammed the bridge of ‘Indigo Flow’ before that song was played.
– Before ‘Jump Around’ (House Of Pain cover), Fred told the crowd that Everlast suffered a heart attack 4-5 days before. After that, he dedicated the song to him.
– Fred got ladies on stage before ‘Faith’ (George Michael cover).

Other Notes:
– Sold out show. Attendance was 3075 people. This was the largest headlining show the band played until that point.
– Thanks to limptones for the ticket stub! 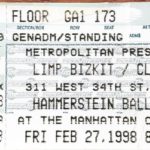 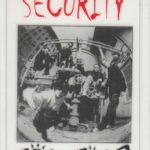