Show Notes:
– Fred made a shoutout to his parents and all the parents of the rest of the band before ‘Thieves’ (Ministry cover).
– Fred went into the soundboard during ‘Thieves’ (Ministry cover). During one of the choruses he sprained his ankle severely when he jumped on a box inside the soundboard. He was able to finish the show, but had to cancel the following show in Orlando.
– Aaron Lewis from Staind joined the band for ‘No Sex’.

Other Notes:
– This show was supposed to take place at Nation (capacity 2000) but was moved to the Veterans Memorial Coliseum on short notice due to overwhelming demand. 5000 people were in attendance.
– Incomplete setlist. These songs came from two reviews. If you were at the show and know the full setlist, please let us know! 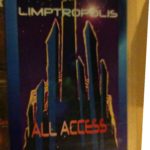