Show Notes:
– Aaron Lewis from Staind joined the band for ‘No Sex’.
– Joe C. came out at one point during the show and performed a short freestyle.
– Fred went to the soundboard for ‘Jump Around’ (House Of Pain cover), ‘Faith’ (George Michael cover)’ and ‘Re-Arranged’. During ‘Re-Arranged’, he stagedived into the crowd to dived back to the stage, leaving him without his cap, his microphone, one shoe and half of his shirt was ripped off while he dived through. When he arrived back, he threw the other shoe out into the crowd and went backstage before ‘Nookie’ was played. 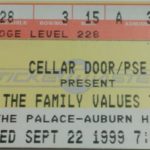