Show Notes:
– The band invited Extreme Championship Wrestlers Steve Corino, Balls Mahoney, Axl Rotten and New Jack to this show. At one point during the show, Fred invited them to come out on stage, Steve Corino accepted, running onstage during the band’s performance and announcing that he’d rather see “good bands” like Carly Simon and The Bee Gees and further stating: “You are the epidemy of what’s wrong with the United States of America.” Fred replied that perhaps he wouldn’t talk so tough if Mahoney, Rotten and New Jack were around, a cue that brought the aforementioned wrestlers out from backstage. The ECW stars then proceeded to pummel Corino with fists, a metal chair, and a beer can as Fred held Corino’s arms behind him. After Corino crashed to the ground with a bloody forehead, the band then resumed its set.

Other Notes:
– Roughly 8000 people were in attendance.
– If you know a full or partial setlist for this show, please let us know! 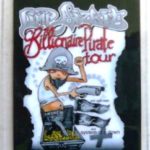