Show Notes:
– This was the first show of the Back 2 Basics tour. The tour was sponsored by Napster and had barriers removed and replaced by a 16 foot high chain-link fence, allowing fans to come face-to-face with the band. Tickets were given in form of wristbands on a first come-first serve basis and venues for each show announced within 24-48 hours before each show.
– Verne Troyer, better known as “Mini-Me” of Austin Powers: The Spy Who Shagged Me”, introduced the band right before they went on stage.
– This was the first time the band performed ‘Hot Dog’.
– The original setlist had ‘Boiler’ written and replaced with ‘My Generation’ instead, but the band decided to drop both and not perform them.
– ‘Master Of Puppets’ (Metallica cover) was not written on the setlist, but Wes decided to play the song after ‘Jump Around’ (House Of Pain cover).
– One fan made it over the fence during ‘Faith’ (George Michael cover), tried to grab Fred, but has been tacked and dragged offstage by security. Fred commented “What do you want to do, date me? Stay off this fuckin’ stage, man. You’re fucking up the whole show”. When fans made it to the top of the gate, Fred urged them to jump by shouting “Jump! Jump! Do it!”.
– Fred brought up a fan on stage to perform ‘N 2 Gether Now’. This was the first time that the song was not performed with Method Man and with someone from the audience to do his parts, instead.

Other Notes:
– 4000 Fans lined up before the show, with the first fans lining up the night before. Only 3000 have been admitted to the show. 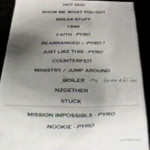