Show Notes:
– Mike and John jammed the intro of ‘Master Of Puppets’ by Metallica before ‘Welcome Home (Sanitarium)’ (Metallica cover).
– The band had a very hard time with Metallica fans at this show. From the moment they got out on stage, the crowd booed and threw stuff at them on stage, causing Fred to rant at them and calling them pussies many times. After Mike got hit with a piece of metal and had his hand cut open during ‘Welcome Home (Sanitarium)’ (Metallica cover), Fred walked over to him and they decided that they will play ‘Faith’ (George Michael cover) and then stop playing. When the band walked off stage, Fred kept calling the crowd obscenities before the PA was shut off. Lars Ulrich later called these actions by the crowd booing the band off stage and throwing stuff at them “not only disrespectful to Limp Bizkit, it’s also disrespectful to Metallica, because we wouldn’t have have fuckin’ put Limp Bizkit on a Metallica stage or invite them to be out here if we didn’t respect them and have love for them and so on”. 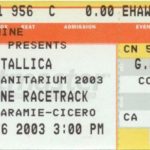 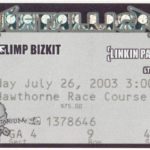 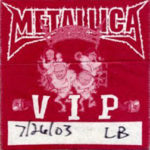