Show Notes:
– Fred got two girls and one guy on stage for ‘My Way’ and ‘Thieves’ (Ministry cover).

Other Notes:
– Limp Bizkit and Linkin Park, who both cancelled their Rock am Ring and Rock im Park 2003 performances, were brought to the festival by MLK (German promoter) due to the cancellations. This show can be considered the makeup for these 2 festivals.
– This festival was always referred to as the “Bizarre Festival” until 2003, when it was legally forced to change its name to Terremoto.
– Almost 30000 tickets were sold for the festival. 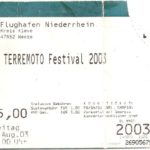 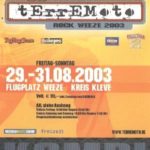 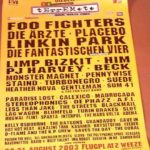