Show Notes:
– This was the first time that the band played ‘Underneath The Gun’ live and also the first time that the band opened a show with ‘Eat You Alive’.
– Fred’s microphone did not work during ‘Eat You Alive’, causing the crowd to sing the song until the first chorus. He got a new microphone and continued the song.
– Fred got a fan up on stage for ‘My Way’.
– During the show, Fred apologized for not making it to Download Festival earlier this year. When he asked the crowd if he really did wrong many said yes and gave him the middle finger. A fan called John shouted no, causing Fred to say “I like this motherfucker” when he sees him.
– Fred went to the balcony in the back of the venue for ‘Behind Blue Eyes’ (The Who cover).
– After the band went off stage, some people in the crowd booed because they were expecting the band to do an encore.

Other Notes:
– Setlist order is not 100% confirmed, but the songs above are confirmed to be played. 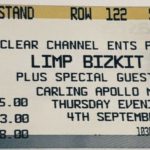