Show Notes:
– This was the first performance of a song called ‘Nevermind’, a song that Fred wrote the lyrics for, mashing it up with the riff of ‘Looking Down the Barrel’ by the Revolution Smile.
– Fred got into the crowd before ‘Eat You Alive’ began and performed the song there.
– Fred dedicated ‘Break Stuff’ to Britney Spears.
– Fred got four fans up on stage for ‘My Way’.
– Fred went to the back of the venue for ‘Behind Blue Eyes’ (The Who cover).
– Following the disappointed reacions of the previous show in Manchester, the band implemented an encore at this show.
– Before the second verse of ‘Full Nelson’, Fred told the crowd “they won a football match tonight”, referring to England’s match vs Macedonia which they won.
– Soundcheck of this show was: ‘Underneath The Gun’, ‘Eat You Alive’, ‘Head For The Barricade’, ‘Gimme The Mic’ and ‘Rollin’ (Air Raid Vehicle)’. When the band soundchecked ‘Rollin’ (Air Raid Vehicle), Mike played the song too fast. When the band finished playing the song, Fred said ‘the song fuckin’ sucks anyway’.

Other Notes:
– This was a free makeup show for the canceled show at Download Festival earlier that year. Tickets were given on a basis of maximum 2 per person at various places.
– 40000 people attended this show, making it the biggest Limp Bizkit headline show ever. 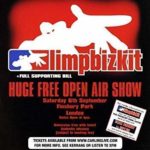