Show Notes:
– This was the first time that ‘Counterfeit’ was played in 2004. The song replaced ‘Gimme The Mic’.
– Fred got fans up on stage for ‘Nookie’. The song also had lyrics of ‘In Da Club’ by 50 Cent added by Fred.
– At one point during the show, Fred told the venue security to open up the side exit doors because it was so hot in the venue.
– DJ Lethal came on stage during ‘Nevermind’ with a joint and smoked it with Fred during and after the song. After that, ‘Behind Blue Eyes’ (The Who cover) was started. 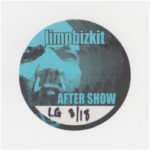