Show Notes:
– ‘Pollution’ was on the setlist but not played at the show.
– Before Wes played the intro riff to ‘Nookie’, Fred sang the chorus over the intro beat and let the crowd sing part of it.

Other Notes:
– This was a free show and tickets were given on a first come-first serve basis. However, not all tickets were given away.
– This show was rescheduled from the originally booked show at Mandalay Bay Resort And Casino on July 10th, which was cancelled due to concerns about DVD rights and disagreement over the venue.
– This show was filmed and supposed to be released on iTunes, but it never happened.
– Huge thanks to paulb from The Armpit for the correct setlist and the pictures! 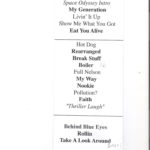 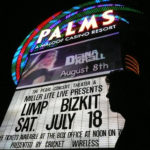