Other Notes:
– All North American Tour headline dates have been cancelled on May 24th and never been rescheduled, despite intentions to move the dates to arenas in the fall of the same year. The statement, released by the band on limpbizkit.com, reads as follows:

Our reason for moving the US tour dates is simple.

We insist on bringing you the best concert experience we have to offer.

An amphitheatre environment won’t allow us to do that with so many seats directly in front of the stage. Moving away from amphitheatres and into venues with appropriate floor space will allow more room for jumping, dancing and moshing directly in front of the stage, instead of on a grassy knoll a hundred yards away. Ultimately this is what we prefer. Those of you who want to sit down during our show will find plenty of seats around the outside of the floor area. We feel strongly about our decision and want this to be your best concert experience of 2010.

We are truly sorry for any inconvenience.

The updated list of dates will be announced as soon as we finish routing the tour (which is being done now) and anyone that has already purchased tickets will be refunded accordingly.

– Snoop Dogg was supposed to join the tour as co-headliner, but dropped out of the tour on May 11th. Ice Cube had been announced as replacement. Method Man & Redman were supposed to join for some dates as well. 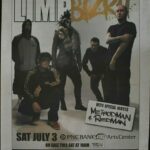