Show Notes:
– This was the first time since 2000 that ‘Show Me What You Got’ opened a show.
– The band did a few changes during the show. ‘Take A Look Around’ was supposed to close the main set but the band stayed on stage until ‘Faith’ (George Michael cover). ‘Thieves’ (Ministry cover) (probably the short version) was supposed to be played after ‘Behind Blue Eyes’ (The Who cover) but dropped during the show. After ‘Faith’ (George Michael cover), the band took a short encore break before coming back on stage to play ‘Rollin’ (Air Raid Vehicle)’ (not on the setlist) as the last song of the night.
– Before ‘Nookie’, Fred asked the crowd if anyone had a joint. When someone said he had one he invited him on stage and had him fire it up and pass it to DJ Lethal and John for taking a smoke. After that he went off the stage again and ‘Nookie’ was started.

Other Notes:
– Sold out show.
– Wes and Fred received many negative reactions about the setlist and questions why they only played 13 songs after the show via Twitter. This is why Wes posted the picture below on his Twitter shortly after the show. 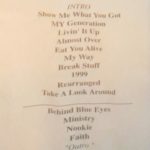 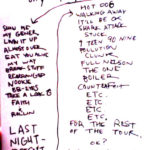 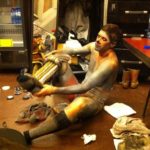