Show Notes:
– Instead of hanging the Swiss flag in front of his turntables as usual, DJ Lethal put the flag of Wallis, the regional canton, in front of his turntables.
– Fred went into the crowd for ‘Eat You Alive’.
– DJ Lethal played the instrumental of ‘A Lesson Learned’ before ‘Boiler’.
– After Fred saw a fan with a flag in the crowd, he got him on stage during the bridge of ‘Nookie’ and let him be on stage for the rest of the song.
– Fred got at least 50 girls up on stage for ‘Faith’ (George Michael cover).
– After ‘Re-Arranged’, the band played the intro of ‘Douche Bag’.
– This was the first time ever that ‘Hot Dog’ closed a show.

Other Notes:
– The band headlined Day 2 of 4.
– Setlist order is unconfirmed, but it’s confirmed that those songs were played! 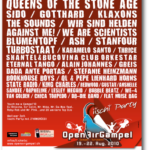