Source 4: Video – PROSHOT (OnMusicStage)
Taper: Flame-XII
Time: 21:57 mins
Format: .flv
Comments: Uploaded on YouTube. ‘My Generation’, ‘My Way’, ‘Rollin’, ‘Take A Look Around’ and ‘Faith’ mixed with pre-show and other footage from the show.

Show Notes:
– DJ Lethal played the ‘A Lesson Learned’ instrumental interlude after ‘Livin’ It Up’.
– ‘9 Teen 90 Nine’ and ‘Walking Away’ reappeared for this show. It was also the first time since the Frankfurt show that Fred screamed the last chorus completely.
– A short guitar intro to ‘It’ll Be OK’ was played by Wes.
– Fred picked a fan up on stage for ‘My Way’.
– The band played ‘Sweet Child ‘O Mine’ by Guns ‘N’ Roses until the first chorus before they played ‘Hot Dog’.
– While Wes played the ‘Break Stuff’ riff before the first verse, Fred took a bottle of Vodka and ordered all the other band members to drink from it, starting with Sam, continuing with DJ Lethal, John, Wes and then himself.
– ‘Boiler’ was on the setlist to start the encore, but has been dropped during the show. 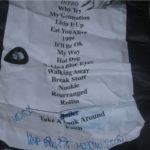