Show Notes:
– The covers medley between ‘My Way’ and ‘Break Stuff’ included ‘Smells Like Teen Spirit’ by Nirvana, as well as Wes playing the riffs of AC/DC’s ‘Back In Black’, after that DJ Lethal sampled a part of ‘We’re Not Gonna Take It’ by Twisted Sister followed by John and Wes jamming to ‘Master Of Puppets’ by Metallica.
– During the bridge of ‘Break Stuff’, Wes also played the theme of Star Trek on guitar. Fred went to the crowd and messed up near the end like he did at the 2009.08.09 Chiba City, Japan show.
– Before ‘Nookie’ was played, Fred asked the crowd if they wanted to hear ‘Gold Cobra’ or ‘Nookie’. The crowd wanted ‘Nookie’ so the band played it.
– The band brought up many people on stage before ‘Rollin’ (Air Raid Vehicle)’.

Other Notes:
– Huge thanks to Limp Bizkit Japan for the pictures! 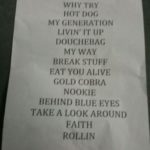 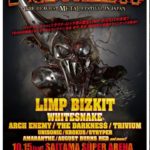 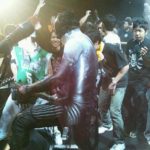