Show Notes:
– The band dedicated this show to Jessica Michalik, the girl who died at the 26.01.2001 Sydney show. Fred did a speech against Big Day Out promoter Ken West as well as an ode for Jessica before ‘My Way’ at the show while Wes and Sam jammed ‘Hold On’. During the speech about Jessica, another backdrop with her name was unveiled. Fred then dedicated ‘My Way’ to her.
– Since the band only had time for one more song, Fred and Wes asked the crowd which song they wanted to hear last. The choice was between ‘Faith (George Michael cover)’, ‘Rollin’ (Air Raid Vehicle)’ and ‘Break Stuff’. After the crowd cheered for ‘Break Stuff’, Fred asked “Jessica, can we play ‘Break Stuff’?”, after the crowd cheered again, the band played it.
– This show marks the first performance of the new intro. It consists of Introbra followed by the instrumental piece the band used to play in 2009 and sometimes in 2010 as well, entitled ‘Space Odyssey’. 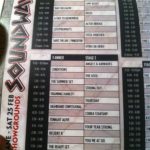