Show Notes:
– The band dedicated this show to Jessica Michalik, the girl who died at the 26.01.2001 Sydney show. Fred did a speech against Big Day Out promoter Ken West as well as an ode for Jessica before ‘Take A Look Around’ at the show while Sam and Wes jammed ‘I Would For You (Jane’s Addiction cover)’.
– Fred asked the crowd which song they wanted to hear last. The choice was between ‘Nookie’ and ‘Break Stuff’, the crowd wanted ‘Break Stuff’ so the band played it. 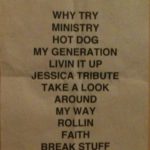