Show Notes:
– ‘Bring It Back’ has been played three times due to the band shooting the music video at this show. Fred announced it before the song got played.
– Fred brought up a couple attendors to let them stagedive at ‘9 Teen 90 Nine’, very likely due to the videoshoot for ‘Bring It Back’
– ‘Just Like This’ has been performed for the first time since the Varasdino 20.06.2009 show. Kevin, singer of the supporting band Yashin, joined the band for it.
– Wes played the intro riff of ‘South Of Heaven’ by Slayer before ‘Break Stuff’.
– Rob, a hardcore fan, brought in a sign for ‘Stuck’. While Fred asked the crowd for requests, he held up the sign, causing Wes to jam the verse on his guitar while Fred sang the chorus of Linkin Park’s In The End. Fred looked at Wes, then at the sign and finally commented “No.”. Before Wes started ‘Take A Look Around’, Wes and Sam jammed a few more bits of ‘Stuck’ before Wes and John started jamming ‘Sour’. ‘Pollution’ followed, but Fred told Sam, John and Wes to stop before the first verse. ‘Take A Look Around’ got played then.

Other Notes:
– This show was originally announced to take place at Heineken Music Hall, but has been moved down to Paradiso. Therefore the show was sold out. 1500 people were in attendance. 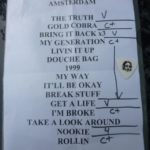