Show Notes:
– ‘Almost Over’ and ‘Don’t Go Off Wandering’ were on the setlist but have not been played during the show. ‘Show Me What You Got’ and ‘Behind Blue Eyes’ (The Who cover) replaced the songs during the set.
– First time that the band opened with ‘Counterfeit’ since the Sacramento 20.06.1999 show. It was only played until the second chorus and went into ‘Show Me What You Got’.
– Wes wanted to play ‘Sour’ which resulted in the song being started, but Fred aborted it after the first chorus.
– ‘The Propaganda’ got replaced by ‘The Truth’ during the show.
– ‘Faith’ (George Michael cover) was requested by the crowd so the band played it. Fred sang a few lines of Styx’ ‘Lady’ before asking what the crowd wanted to hear.
– Ryan Campbell, the opening act, joined the band for ‘Killing In The Name’ (Rage Against The Machine cover).
– A fan got up on stage for ‘Gold Cobra’.
– After ‘Killing In The Name’ (Rage Against The Machine cover), the band played a covers medley, starting with Slayer’s ‘South Of Heaven’, going on with the Star Wars and the Simpsons themes, then played a part of ‘Alive’ by Pearl Jam and ended with a part of ‘All Apologies’ by Nirvana and a short jam of the bridge of ‘Master Of Puppets’ by Metallica.

Other Notes:
– Sold out show. 1000 people were in attendance.
– Thanks to Mark for confirming the setlist and the setlist picture. 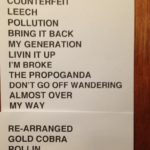 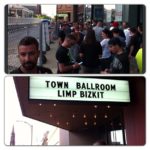