Show Notes:
– Fred brought up a kid on stage for ‘Killing In The Name’ (Rage Against The Machine cover).
– ‘Pollution’ was only played until the end of the first chorus and went into ‘Re-Arranged’.
– Wes and John played a short covers medley after ‘Boiler’, jamming ‘All Apologies’ by Nirvana as well as ‘Master Of Puppets’ by Metallica. When Wes wanted to start with the vocals (first time since 2001 at a Limp Bizkit show), John stopped playing which resulted in Wes insulting him for fun, when he finished Fred said “don’t piss off on the drummer” for fun purpose too before he started ‘Rollin’ (Air Raid Vehicle)’. 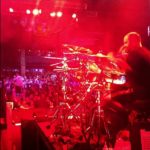