Show Notes:
– The band played a covers medley after ‘My Way’ starting with ‘Cowboys From Hell’ by Pantera, continuing with ‘Alive’ by Pearl Jam and finishing with ‘Seven Nation Army’ by The White Stripes before the band went on with ‘Re-Arranged*.
– A fan called Josh brought a Three Dollar Bill, Y’all logo designed flag to the show. Fred noticed him after ‘Faith’ (George Michael cover) and was brought up on stage for ‘Counterfeit’ and ‘Pollution’. ‘Counterfeit’ was only played until the second chorus, the band went on with ‘Pollution’ which was only played until the first chorus. Wes continued playing the song, but Fred didn’t continue, leading Wes to start ‘Take A Look Around’ instead. 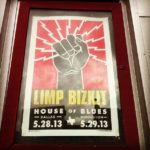 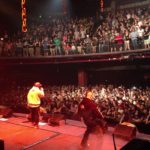