Show Notes:
– First time ever that the band opened a headline show with the short version of ‘Thieves’ (Ministry cover).
– ‘Stalemate’ was on the setlist but replaced with ‘Faith’ (George Michael cover) during the show.
– ‘Hot Dog’ included a ‘Creeping Death’ by Metallica jam as start of the bridge for the first time, the setlist paper says ‘Hot Dog / Metallica’.
– Jagger Alexander-Erber, a young drummer who is known in Australia for being among the Top 10 drummers under 21 years of age, joined the band on stage for ‘Take A Look Around’ from the bridge onwards. 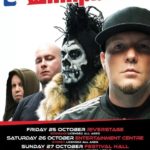