Show Notes:
– Wes, Sam and John played the intro of ‘Creeping Death’ by Metallica after the second chorus of ‘Hot Dog’ before continuing the song.
-‘Get A Life’ was on the setlist but replaced with ‘Eat You Alive’ during the show.
– The band played a Covers Medley after ‘Nookie’, starting with Wes and John jamming the bridge followed by the intro of ‘Master Of Puppets’ by Metallica, followed by the band jamming ‘Welcome To The Jungle’ by Guns ‘N’ Roses until the first chorus and finished with Wes and John playing the intro of ‘Bombtrack’ by Rage Against The Machine.
– This was the first time that ‘Re-Arranged’ went into ‘Heart-Shaped Box’ (Nirvana cover) instead of ‘Killing In The Name’ (Rage Against The Machine cover).
– The band played ‘Smells Like Teen Spirit’ by Nirvana until the first chorus after the band played ‘Heart-Shaped Box’ by Nirvana, which was played until the second chorus.
– During ‘Smells Like Teen Spirit’ (Nirvana cover), Fred saw a girl breaking out emotionally so he decided to bring her up on stage during the song. When she got on stage, she started crying, Fred pointed on her Nirvana T-Shirt and then joined Wes singing the song. After the band finished playing the song, Wes came to her and handed over a bottle of water and a plectrum. Fred then said hi to her and told her to talk to the audience while Sam started jamming ‘I Would For You’ (Jane’s Addiction cover). Wes joined jamming the song and she said “You are my favorite music band”, Fred then told her to tell the audience something in russian. She then said that the band is her favorite band and thanked them for making this possible in russian and continued crying. Fred joined Sam and Wes for ‘I Would For You’ and sang the song until the first chorus, then told her to go to the side stage and Wes started with ‘Faith’ (George Michael cover). 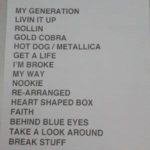 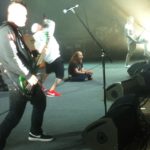