Show Notes:
– Wes, Sam and John played the intro of ‘Creeping Death’ by Metallica after the second chorus of ‘Hot Dog’ before continuing the song.
-‘Get A Life’ was on the setlist but replaced with ‘Eat You Alive’ during the show.
– This was the first time that ‘The One’ has been played since the 2010.09.24 Hamburg show.
– The band played a Covers Medley after ‘My Way’, starting with the bridge and intro of ‘Master Of Puppets’ by Metallica and finished with ‘Welcome To The Jungle’ by Guns’N’Roses until the first chorus.
– The band played ‘Smells Like Teen Spirit’ by Nirvana until the first chorus after the band played ‘Heart-Shaped Box’ by Nirvana, which was played until the second chorus.
– This show had additional production, with screens in the background showing animations. 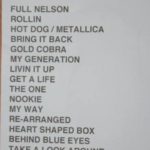