Show Notes:
– ‘Hot Dog’ included a ‘Creeping Death’ by Metallica jam.
– ‘Pollution’ and ‘Counterfeit’ weren’t on the setlist but Fred asked the crowd “if they wanted it”. The two songs were played as a medley and played until the first chorus.
– The band jammed the Intro of ‘Bombtrack’ by Rage Against The Machine before they went on with ‘Re-Arranged’.
– During the intro of ‘Take A Look Around’ Fred commented: “what can you do with 70 minutes only?”. He referred this to the promoters who gave the band only 70 minutes to play. 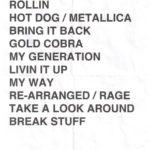 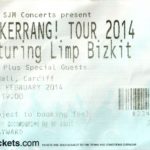 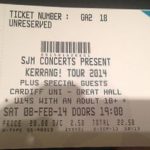