Show Notes:
– ‘Pollution’ has been played until the second chorus and went straight into ‘Hot Dog’.
– Wes, Sam and John jammed the intro of ‘Creeping Death’ after the second chorus of ‘Hot Dog’ before they continued with the bridge.
– Sam’s bass had technical difficulties during the show.
– This was the first time since the 2011.07.12 Codroipo, Italy show that ‘Bring It Back’ opened a show.
– The band did a short Covers Medley including Metallica’s ‘One’ Intro and Pearl Jam’s ‘Alive’ Intro as well as Wes playing the intros of ‘Sweet Child ‘O Mine’ and ‘Welcome To The Jungle’ by Guns ‘N’ Roses’. After that, the band played a Nirvana Medley, including ‘Heart-Shaped Box’ (until the second chorus) and ‘Smells Like Teen Spirit’ (until the first chorus). After that, ‘My Way’ was played.
– Wes tried to tell a joke to the audience before ‘Take A Look Around’ but they wouldn’t listen to he stopped and started the song.
– ‘Full Nelson’ was on the setlist before ‘Take A Look Around’ but got replaced by ‘Nookie’ during the show. 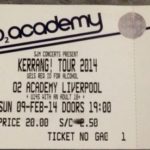