Show Notes:
– The band plagued a tight curfew which got set right before the show was supposed to start. They had to be done by 9:30 pm but did not hit the stage before 8:45pm resulting in the band exceeding curfew by 40 mins and leaving the stage after 80 mintues!
– Another show intro for ‘Gold Cobra’ was debuted at this show! Fred introduced each band member starting with Franko doing the samples followed by John started with the beats followed by Sam playing his bass line and when he introduced Wes the song has been started.
– ‘My Generation’ didn’t have an extended bridge for the first time since the Kerkrade 21.06.2012 show.
– Fred was in the crowd from the end of ‘Hot Dog’ until the bridge of ‘I’m Broke’.
– The cover’s medley included parts of ‘..And Justice For All’, ‘Master Of Puppets’ (both by Metallica) and ‘Holy Wars… The Punishment Due by Megadeth.

Other Notes:
– This show was originally announced to take place on July 2nd, but has been moved to June 11th following the added show in Lausanne, Switzerland.
– Sold out show. 850 people were in attendance. 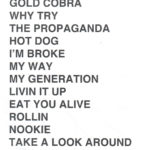 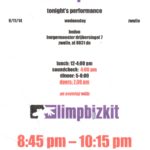 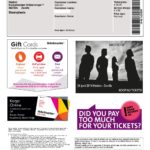 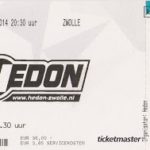