Show Notes:
– The band had a very tight 10 pm curfew resulting in the show being 85 minutes only.
– ‘Pollution’ was played until the first chorus after fans in the first row shouted for it.
– Fred brought up fans to play ‘Hot Dog’ on drums, guitar and vocals. Fred made the fans stop during the first verse after the vocalist messed up a few lines.
– This was the first of two ever performances of ‘Bring The Noise’ (Public Enemy cover). Scott Ian, Frank Bello and Joey Belladonna from Anthrax joined them for the song. The song was played until the second chorus.

Other Notes:
– Soundcheck included ‘Almost Over’, ‘So What’ (Ministry cover), ‘Bring The Noise’ (Public Enemy cover) three times with Anthrax and Sam playing the bassline of ‘Re-Arranged’. 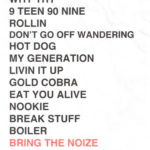 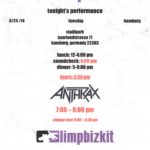 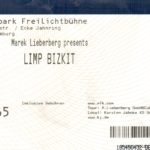 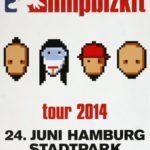