Show Notes:
– Fred went into the crowd during the bridge of ‘Livin’ It Up’. When he wanted to continue the song, he stopped the song due to someone falling down in the pit. After that, the song was resumed from the bridge.
– After the second chorus of ‘Hot Dog’ the band jammed the intro of ‘Creeping Death’ by Metallica before going back into ‘Hot Dog’.
– Wes and John jammed the bridge of ‘Master Of Puppets’ and the intro of ‘.. And Justice By All’ by Metallica before ‘Heart-Shaped Box’ (Nirvana cover) was played until the first chorus.
– ‘Thieves’ (Ministry cover) wasn’t on the setlist but played in it’s short version to get the crowd going.
– During the intro of ‘Break Stuff’, Fred commented “oh shit” to which he added immediately “I shouldn’t be cursing so much, my twelve year old son is here” – referring to his son Dallas watching the show from sidestage.
– Fred brought up a girl on stage for ‘Eat You Alive’.
– Fred let the crowd sing the last chorus of ‘Behind Blue Eyes’ (The Who cover).
– Wes, Sam and John jammed the intro of ‘Counterfeit’ but had to stop due to time constraints so ‘Take A Look Around’ could still be played.

Other Notes:
– The band headlined the second stage. 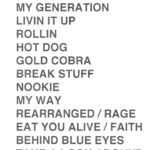