Show Notes:
– This was the first time ever that ‘Faith’ (George Michael cover) opened a headline show!
– ‘Pollution’ was not on the setlist and played until the first chorus. ‘Bring It Back’ was not on the setlist either and played during the show, making it the only show of the tour where all 3 rehearsed songs off Gold Cobra were played, those being ‘Gold Cobra’, ‘Why Try’ and ‘Bring It Back’.
– Wes and John jammed ‘..And Justice For All’ and ‘Master Of Puppets’ by Metallica after ‘Rollin’ (Air Raid Vehicle)’.
– The band jammed a part of Metallica’s ‘Creeping Death’ after the second chorus of ‘Hot Dog’.
– Franko’s riser almost broke during the show, causing him to stop playing the show after ‘Livin’ It Up’. All other songs after that were played without samples.
– Tye Zamora from ex-Alien Ant Farm, Sam’s bass tech at the time, played bass on ‘My Way’ until the bridge.
– Due to Franko not being able to play anymore the band changed up the setlist even more and cut off ‘Nookie’ and ‘Behind Blue Eyes’ (The Who cover) off the setlist and played ‘It’ll Be OK’ and ‘Re-Arranged’ going into ‘Killing In The Name’ (Rage Against The Machine cover) instead.
– Wes’ guitar broke during the last chorus of ‘Break Stuff’. 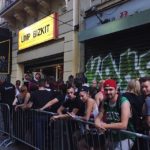