Show Notes:
– Machine Gun Kelly joined the band for ‘My Generation’.
– The band did a covers medley after ‘Livin’ It Up’ including ‘Seek & Destroy’ and ‘Master Of Puppets’ by Metallica as well as the first verse of ‘Wicked’ by Ice Cube which was performed for the first time since the 2012.06.21 Kerkrade, Netherlands show where only the first few lines of the song were rapped.
– Wes, John and Sam jammed the intro and part of the first verse of ‘It’ll Be OK’ as well as the intro of ‘Pollution’ before the entire band played ‘Eat You Alive’.
– A fan requested ‘Stuck’ during the entire show causing Fred to bring him up on stage to perform the song, the band started the song and due to the fan failing on the vocals, the band broke it up after the first chorus.
– Wes was in the crowd for ‘Break Stuff’. 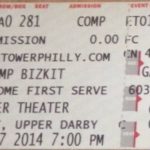 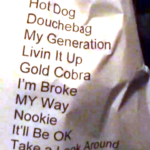