Show Notes:
– This was the band’s first headline show in South Korea since 2009.
– ‘Ready To Go’ was not on the setlist but played after a girl in the front row held a sign up that she wanted to play the song with the band. Fred pulled her up and let her perform the song with the band!
– ‘Trust’, ‘The Propaganda’ and ‘Eat You Alive’ were on the setlist but dropped during the show.
– ‘Nookie’ has been played until the second chorus and went right into ‘Full Nelson’.
– ‘Welcome To The Jungle’ (Guns’N’Roses cover) has been played until the first chorus before the band went on with ‘Boiler’. 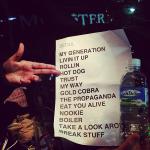