Other Notes:
– This festival was supposed to take place at Tail Creek Raceway Grounds in Alix, Alberta, but has been moved to the Shaw Conference Centre in Edmonton, Alberta because the the organizers didn’t have enough time to finish improvements. On June 16th, the organizers announced that the festival is canceled, releasing following statement:

After moving the Tail Creek Mud & Music Festival to the Shaw Conference Centre in Edmonton, our fans have made themselves loud & clear that the spirit of the festival belongs outdoors, and thus, the 2015 edition of the festival has been cancelled. 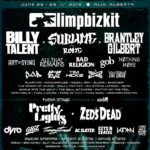