Show Notes:
– Wes did not perform with the band because of commitments with Queen Kwong. Instead, he lent his gear to Nick Annis (who plays guitar in his side project Black Light Burns) and had him fill in for him! This was the first of two shows where Nick filled him for Wes, the other being the following show in Taichung, Taiwan. This was the first time since 2001 that Limp Bizkit played a show that did not have Wes on guitar.
– ‘Nookie’ had some extra production for the kick in of the intro.
– Fred got girls up on stage for ‘Faith’ (George Michael cover).
– After ‘Faith’ (George Michael cover), Nick, Sam and John jammed ‘Smells Like Teen Spirit’ by Nirvana until the start of the first verse. Then, DJ Franko played his remix of ‘Walk’ by Pantera and the three jammed the intro of the song, too. 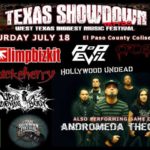