Show Notes:
– Wes did not perform with the band because of reconstruction works at his new house in Detroit. Instead, he lent his gear to Nick Annis (who plays guitar in his side project Black Light Burns) and had him fill in for him! This was the second of two shows where Nick filled him for Wes, the other being the following show in El Paso, Texas.
– This was the first time since the 2013.04.29 Asbury Park, NJ show that the band played ‘I Would For You’ by Jane’s Addiction.
– The festival plagued very severe typhoon storms the day before it took place and during the day, resulting in the stage taking damage. The band requested to play the Main Stage as the only act that day due to security concerns. The band performed without it’s own backdrop, instead the festival backdrop was put on. Due to the severe storms the show started 40 minutes later and the lights didn’t work and therefore only non rotating red light was present during the show! Many people in attendance complained about bad behaviour (such as throwing beer and water into the crowd, cursing) by the band on the festival’s Facebook page after the show.
– The band had ‘Rollin’ (Air Raid Vehicle) written on the setlist paper only, but played a 75 minutes set nevertheless.
– Fred told DJ Franko to play the ‘Party Up’ by DMX Interlude before Nick’s guitar was ready to play.
– When Nick started playing ‘Full Nelson’, Franko accidently started playing the beats of ‘Nookie’, causing Fred to say “I don’t know what Franko was doing” before the band played ‘Full Nelson’.

Other Notes:
– This was the band’s first show in Taiwan. 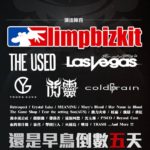 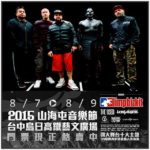