Show Notes:
– Since it was Fred’s birthday, he invited at least 50 girls up on stage during the second chorus of ‘Nookie’. 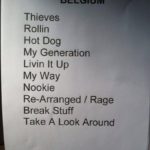