Show Notes:
– ‘Gold Cobra’ was on the setlist on the third spot, but not played.
– The band played a short Covers Medley after ‘Nookie’, playing ‘Thieves’ by Ministry in it’s short instrumental version and ‘Smells Like Teen Spirit’ by Nirvana after.

Other Notes:
– The show was advertised as being on the 22nd, but the band did not play until 12:10am local time, making the date of their performance the 23rd. 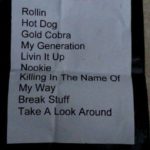