Show Notes:
– This was the first time since the 2013.05.10 Grand Rapids, Michigan show that ‘Just Like This’ has been played. It was also the first time since the 1999.03.31 Niigata, Japan show that the song opened a show.
– Fred brought his wife Kseniya Durst out on stage during ‘Livin’ It Up’.
– The band jammed the intro of ‘Master Of Puppets’ by Metallica after the second chorus of ‘Hot Dog’ before continuing the song.
– ‘Get A Life’ was on the setlist after ‘My Way’ but dropped during the show.
– It is unknown where ‘Thieves’ (Ministry cover) was played at.
– Soundcheck of this show included ‘Get A Life’, ‘Bring It Back’, a short ‘Back In Black’ by AC/DC jam and ‘Dead And Bloated’ by Stone Temple Pilots. 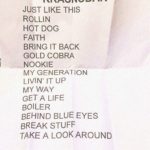