Show Notes:
– The band jammed the intro of ‘Master Of Puppets’ by Metallica after the second chorus of ‘Hot Dog’ before continuing the song.
– Wes and John jammed the intro of ‘Wasted Years’ by Iron Maiden before ‘Gold Cobra’.
– Fred went into the crowd during ‘Livin’ It Up’ and ‘Eat You Alive’.
– Wes jammed the intro of ‘All Apologies’ by Nirvana before he started playing ‘Smells Like Teen Spirit’ (Nirvana cover). After that, he got a fan on stage but he wasn’t able to play guitar so he got him off stage shortly after. After that, Wes started ‘My Way’ but Fred told him to stop, so Wes kept teasing before the band finally played the song.
– Fred got his wife Kseniya Durst and a fan called Anna on stage to have her communicate with the crowd and sing ‘Behind Blue Eyes’ (The Who cover) with him. This was the first time ever that a female fan was pulled up on stage to sing an entire song in a duet with Fred.

Other Notes:
– This show was announced in August following the cancellation of the show in Saratov due to low ticket sales. 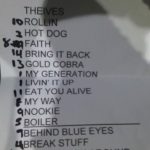