Show Notes:
– Fred went into the crowd at the first row during the bridge of ‘My Generation’ and stayed there until the end of the song.
– The band jammed the intro of ‘Master Of Puppets’ by Metallica after the second chorus of ‘Hot Dog’ before continuing the song.
– Fred told Kadaver, Wes’s guitar tech, to bring up people on stage during the bridge of ‘Eat You Alive’.
– The band played a Nirvana Medley after ‘Bugatti’ (Ace Hood cover), playing ‘Heart-Shaped Box’ and ‘Smells Like Teen Spirit’ until the first chorus.
– Soundcheck included ‘Livin’ It Up’, ‘Bring It Back’, ‘Bugatti’ (Ace Hood cover) and ‘Heart-Shaped Box’ (Nirvana cover) twice.

Other Notes:
– This was the second time that the band played in Samara after 2012. 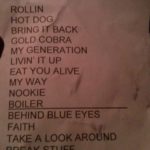