Show Notes:
– ‘Welcome To The Jungle’ by Guns ‘N’ Roses (Intro -> Verse 1 -> Chorus 2) was played as show intro before the band went into ‘Rollin’ (Air Raid Vehicle)’.
– Before ‘My Generation’ was played, Wes fooled around with the “If only we can fly” line, causing Fred to fool around with it as well. When John actually didn’t start the song, Wes came to him, put his guitar on his cymbals for a couple seconds, then took it away and went side stage. When he came back, the song was started.
– During the bridge of ‘Livin’ It Up’, Fred took a sign from somebody in the audience which had written “Krim = Russia – Welcome”.
– Fred went into the crowd during ‘Eat You Alive’ until the bridge of the song.
– The setlist had ‘Boiler’ or ‘Walking Away’ written as the last song before the encore. During the show, Fred decided to play ‘Walking Away’.
– During the bridge of ‘Break Stuff’, Fred invited FOH engineer George to join the band for the rest of the song on vocals.
– The “LIMP BIZKIT” background lights production was replaced with a huge screen for this show. The screen had the movie (TBA) playing back while the band played the show. This was the only show of the tour where the band did this.

Other Notes:
– This show was originally announced to take place on November 2nd, but has been moved to November 10th so the band could add a second show in Moscow. 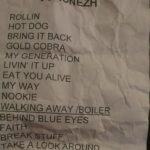