Show Notes:
– ‘Welcome To The Jungle’ by Guns ‘N’ Roses (Intro -> Verse 1 -> Chorus 2) was played before the band went into ‘Rollin’ (Air Raid Vehicle)’.
– The band jammed the intro of ‘Master Of Puppets’ by Metallica after the second chorus of ‘Hot Dog’ before continuing the song.
– A fan called Artyom brought a sign to the show that said “Let me play guitar with you on stage”, prompting Wes to bring him up on stage after ‘Bring It Back’. Fred asked him which song he wanted to play and he told him it was ‘Pollution’. The song was played until the second chorus.
– ‘Behind Blue Eyes’ (The Who cover) was dropped for this show for an unknown reason, the only show of the tour of where the song was not played.
– Wes jammed the intro of ‘All Apologies’ by Nirvana before starting ‘Smells Like Teen Spirit’, which was played until the first chorus.

Other Notes:
– This show was announced on February 11th after the show in Tyumen has been canceled. The show was supposed to take place at Traktor Arena (the same venue the band played in 2013) but has been moved to Dvorets Sporta Yunost due to lower than expected ticket sales. 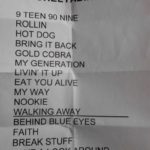