Show Notes:
– The band jammed the intro of ‘Master Of Puppets’ by Metallica after the second chorus of ‘Hot Dog’ before continuing the song.
– ‘Buggati’ (Ace Hood cover) wasn’t on the setlist but added during the show.
– Fred brought 4 fans up on stage for ‘Full Nelson’.
– ‘Boiler’ was on the setlist, but dropped during the show.

Other Notes:
– This show was announced in July after the show in Irkutsk has been canceled.
– Attendance was 3000 people.
– Fred played an aftershow DJ set with Noize MC at Club Pankratov.
– At the night before the show, Fred starred in a short movie, where he plays an american exploring the rural russian culture. 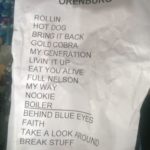 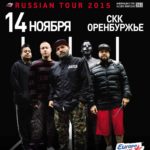