Show Notes:
– This was the first time ever that the first part of ‘Endless Slaughter’ has been played live by the entire band. The song was played over the PA at the 10.06.2014 Haarlem, Netherlands show to shoot the scene for the first part of the song, but Fred’s microphone was muted. The song transits straight into ‘Hot Dog’.
– The band jammed the intro of ‘Master Of Puppets’ by Metallica after the second chorus of ‘Hot Dog’ before continuing the song.
– Before ‘Gold Corba’, Wes and John jammed the intro of ‘South Of Heaven’ by Slayer before Wes started playing the band’s instrumental version of ‘Wicked’ by Ice Cube. Fred even joined to rap the first lines of the first verse, then stopped.
– Before ‘My Generation’, Wes and John jammed the bridge of ‘Master Of Puppets’ by Metallica followed by the intro of ‘And Justice For All’ by Metallica followed by them jamming the intro of ‘Holy Wars.. The Punishment Due’ by Megadeth. After that, Wes jammed the intro of ‘Pollution’. After the crowd gave a good response, he played the intro again, John and Sam joined until the first verse is supposed to start, but Fred told them to stop.
– ‘Nookie’ was on the setlist at the spot after ‘Full Nelson’, but Wes decided to swap the songs during the show.
– The “LIMP BIZKIT” background lights production was not brought for this show for an unknown reason.
– Soundcheck of this show included ‘My Way’ and part one of ‘Endless Slaughter’. 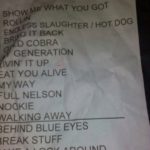